December 2015
It has become increasingly apparent that our Ellesmere layout has seen better days. Therefore we have decided to keep the main boards featuring the station and yard as a static model for display purposes, and over the coming years will start on construction of a new and perhaps a more accurately modeled version of Ellesmere, utilizing the model buildings that John had originally built.

Our deepest thanks to Andrew Tullo and Lionel Wass of the Cambrian Museum at Oswestry for their kind guidance and outstanding help.

After last years show (2013), we decided it was time to make some much needed improvements to the Ellesmere layout. Being about 20 years old now, it has suffered over the years with being moved around from the closed Llangollen Dapol exhibition (it had suffered badly there under the hands of a baboon of a maintenance man until he was sacked) and general poor storage and care. John lent it to me for display in my old model shop in Ellesmere, and it has become a labour of love to try to restore it to its former glory.
Unfortunately the baboon had damaged all the points by using a hard track rubber mounted on the end of a stick whilst trying to scrape through to Australia; all the point blades were bent, and several had been SOLDERED to the track to make contact. He had also ripped off some of the wiring from the fitted point motors, and had pulled off 3 motors completely. A n old ex-BR bodger who believed in large hammers and frequently used them, he went on to help out at Llangollen Railway and wrecked a carriage!

We decided to replace all the wiring including Johns original control board, which had been built using bomb arming switches from a WWII Lancaster bomber. The rear fiddle yard track had been damaged (in fact the board had been cut in half including the track) so it was time to rebuild that. The other inherited problem were the 2 small end boards that took the main tracks from both ends of the main board around in a semicircle to the rear fiddle yard. John had built the main board faithfully to the prototype using original track drawings, to fit into his rear room, which did not leave much room for the curves. On occasions we have had trouble running trains through the bridges either end as the curves started immediately, causing some coaches to catch on the bridge parapets. Now the club have taken on the layout, we decided once and for all to rectify that problem by making larger boards and starting the curves further on them.
One of the new end boards being worked on. Ian is drawing the curves on from both main board to rear fiddle yard. The small rectangular piece of wood set into the main board is a locator we put in, inset into the new board. It allows us to have the new track joins on the new board.
The second photo shows a penny wedged between the boards whilst bolted together... not a mistake but a great tip we were told. Place pennies between the boards and clamp them up, lay the track and pin in place, ready for the next stage. 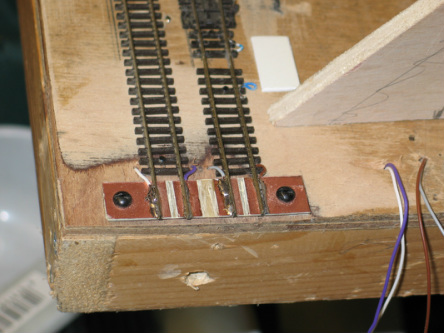 We decided to secure the new track on both edges of the boards by using some strips cut from a copper clad circuit board from Maplins, As these were not to be hidden by scenics etc, it was ok to cut 15 mm wide strips for each side of each joint. The gaps between the rails were marked up by pencil, then the waste areas were scrapped away. Packing the strips up with thin card if required, they were then screwed down and the track soldered to them. Now comes the clever bit...remember the pennies? Using a cutting disk in a Dremel drill, we cut the track at the exact gap between the boards. Undo the bolts and retrieve the pennies that fall onto the ground and roll everywhere, file down any burrs on the track rail, then tighten the bolts up. The track stays in the same position and they butt up really nicely, ideal for running stock again.

Then we decided to make a new control board... 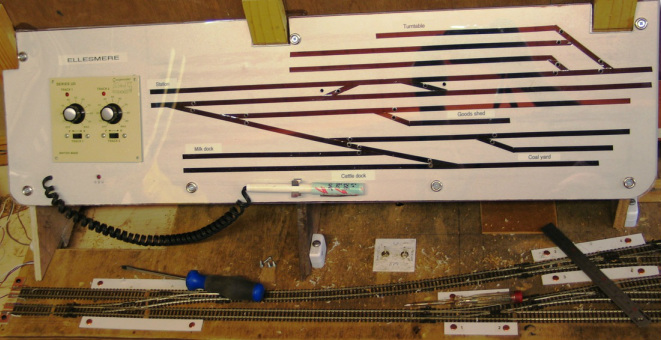 Ok, gluttons for punishment here... but we did need to do something to bring the layout back to life.
The fiddle yard points are now motorised and are operated by stud work by the left side points, the right hand points being operated in tandem.
The switches on the board are to isolate the main tracks.
The panel has been drilled for the new copper studs, and will be wired to the capacitor discharge unit mounted behind the controller. The curled wire is the probe, made from an old pen with a copper stud at the end.


The stud wiring is the next job on the list... Jack is working on that job right now. 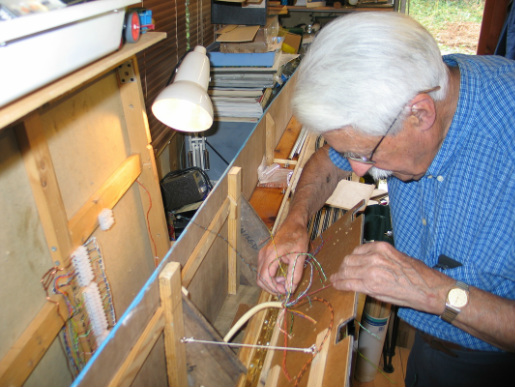 The detachable wiring harness from the control board to the main board. Still requires finishing. 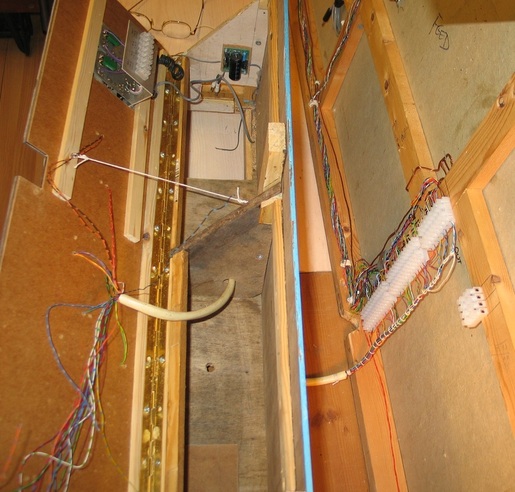 The plug in terminal blocks we use for connecting the separate boards together.
These are 12 way and are 6 amp 450 volts rated, available from Amberley Services, Squires or Ebay.